Good God I love Christmas in Ireland. The atmosphere, the buzz, the Irish Christmas traditions the decorations and the cosy Christmas pints. You can’t bate it.

In the guide below, we’re going to tackle the many Irish traditions that revolve around the mighty Christmas period.

You’ll find everything from the making of Christmas cake two months before the big day to Nollaig na mBan (Women’s Christmas) in the guide below.

In the guide below, you’ll find fourteen traditions that are practised at Christmas in Ireland. If there’s a tradition that we’ve missed, let me know in the comments section!

Ah, good aul December 8th. There are two Irish Christmas traditions associated with this day that are still alive and well in Ireland.

The first is the putting up of the Christmas tree; we were always told as kids that December 8th was the day when you were officially ‘allowed’ to start decorating your house.

Now, of course some people put their tree up waaay earlier, but it’s from December 8th that you really notice trees shining bright out of the windows of homes across Ireland.

The second tradition associated with December 8th revolves around shopping. On this day, people from outside of Dublin travel to the capital to do their Christmas shopping.

This leads me into tradition two – popping up Christmas decorations around the house. So, some people will just pop up a Christmas tree in the corner of their living room, and that’ll be it.

Others will place tinsel and fat little ornaments of Santa around their living room and in many places on the ground floor of their home.

Now, this tends to be done to different extremes. Some people go all out and decorate their home so brightly and extravagantly that you can see it from space.

January 6th is traditionally when the tree comes down and all of the festive gear goes back up into the attic. However, on this day, another Irish Christmas tradition takes place – Nollaig na Ban (AKA ‘Little Christmas’ or ‘Women’s Christmas’).

This custom was born during a time when the running of a home was left to the women of the house. Over the Christmas period, a lot of work would go into cooking, decorating and keeping the house ticking over.

January 6th was, and still is in some parts of Ireland, a day when all of the work that was done over the festive period was/is celebrated. The chores would pass to the men of the house and the women would meet up with friends. 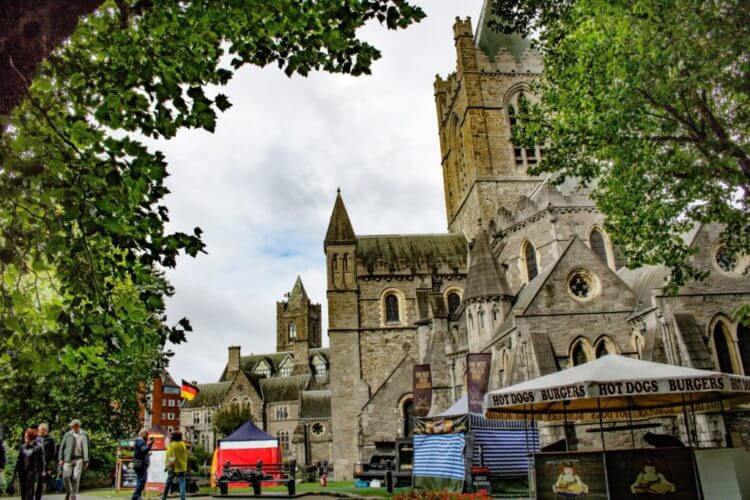 Midnight Mass on Christmas Eve in Ireland is a tradition practised by many. Now, although Midnight Mass was traditionally held at Midnight, it’s now, in many places, held at 10:00.

I’ve heard many different stories over the years about why this was moved back to 10… if you rack your brain for a minute, I’m sure you can probably guess why.

Apparently, some people would head off for a few drinks and arrive at Midnight Mass worse for wear… translation: they arrived at Mass pi**ed, and you can’t be having that.

As you can imagine, the water in Ireland isn’t the warmest at the best of times – in the depths of December, it’s pretty damn chilly. These days, many people take part in the Christmas morning swim as part of a charity fundraiser.

Many of Ireland’s towns and villages are decorated in some way in the weeks and, in some places, months before Christmas arrives.

In Dublin, decorations start to go up at the beginning of November, with decorations getting more and more lavish in the weeks before December.

You tend to hear an awful lot of different stories behind the Wren Boys tradition, with many people citing that it’s tied to Irish mythology.

The tradition of the Wren Boys takes place on December 26th, otherwise known as ‘St. Stephen’s Day’ (Boxing Day in the UK), and involves the hunting of a fake wren and popping it on top of a pole.

The ‘Wren Boys’, dressed in straw suits and wearing masks then walk through the local town or village playing music. It’s said by some that the killing of the wren is linked to people marking the end of the year with a sarrifice.

It’s been a long long time since I’ve heard of this tradition being practised on St. Stephen’s Day in Ireland, but it’s an ancient tradition so I’ve popped it in.

Christmas markets in Ireland are a relatively new arrival. Many towns and cities across Ireland now boast their very own Yuletide Market.

Although each market tend to vary in size, they all tend to offer the same thing. Those that visit can expect stalls laden with festive food and drink, crafts and local produce.

9. Placing a candle in the window on Christmas Eve

Next up is an Irish Christmas tradition that has spread right the way around the world thanks to the many Irish immigrants that have set up shop in countries across the world.

This tradition dates back hundreds of years and takes place on Christmas Eve after the darkness of the evening sets in. Before settling in for the evening, many homes will light a solidatry candle and place it in their window.

I always remember as a kid ringing my Nan and Grandad for a chat on Christmas Eve and they’d ask if we had our candle in the window yet.

As a kid, I always used to go to a ‘Pantomine’ (Panto for short) with my Nan in Dublin. If you’re not familiar with Pantos, they’re a kind of musical comedy that take place on stages of various sizes.

They were originally developed in the Uk but they’ve been popular in Ireland for many years. One of the most notable Pantos in Ireland takes place in the Gaiety Theatre every year.

I always remember my Nan, in the week or so after Halloween, starting to make her Christmas cake. This was one of those events that always signalled that Christmas was en route.

An Irish Christmas cake is a rich cake that contain anything from fruit and nuts to mixed spices and more. They also contain a good slug of whiskey and are topped off with a thick head of marzipan icing.

Second last on our list is the tradition of meeting friends for festive pints. When I was younger, nights out at Christmas weren’t tradition – you’d be meeting them anyway.

Then, as the years went on, you start to meet with friends less and less. Sometimes, it’s because those friends have moved abroad. Others, it’s because you’ve naturally drifted apart for one reason or another.

Festive pints is a mighty tradition that often take place back in your home town or village. Old groups of friends get back together and memories, good and bad, are shared.

On Christmas day, dinner tends to be a big event in many homes in Ireland. The time that it’s eaten at and the food that’s served will vary depending on county and family.

In my home, in Dublin, myself, my Dad and my mad little dog Toby sit down to a Christmas dinner that’s made up of vegetable soup to start, turkey, ham, stuffing, veg and every kind of potato that you can imagine for main and then something sweet for dessert.

How to say Happy Christmas in Irish

Any time that we publish a guide on this website with a festive them we get asked one question – ‘How do you say merry Christmas in Gaelic?’