In Greece when we talk about the “holidays” we are referring to the holiday period of Christmas, New Year and Epiphany.

Traditionally the Christmas holiday period lasts 12 days in Greece. There are many customs associated with the “twelve day of Christmas,” some very old and others relatively recent, like the decorated tree and the turkey on the Christmas-day table.

Historically, in 354 A.D. it was arranged for the birth of Christ to be celebrated on December 25, the same day that they celebrated the birth of the ancient god Mithra, known as the “invincible sun god” and god of all solar deities in idolatry. With the change, and the turning of people towards other gods, the popularity of the “invincible sun god” dropped and Christ took his place.

CHRISTMAS TRADITIONS IN CRETE AND GREECE

Christmas in Greece, or “the holidays,” are not what they were 40 years ago. Over the years we notice a universal culture developing as the western European customs spread more and more change. In some cases, it caused the elimination of local customs in certain areas – even entire countries.

Today Christmas in Greece appears more impressive, glossier and more glamorous. Store windows are decorated almost a month in advance, and in the cities the streets and town squares are lit with colourful lights. Also, many people now travel either abroad or around Greece to places which offer winter holidays.

Greeks will party at clubs, at bouzoukia, which have almost disappeared in Crete, or stay at home and watch some impressive holiday show on television. But on Christmas Day, all family members gather at the festively set dinner table.

The name days of Manolis or Emanuel or Manos or Emanuela are all celebrated on Christmas Day, and friends and relatives will stop by to wish them “many happy returns” or “hronia pola”.

In olden times, Christmas was simpler, warmer, perhaps much closer to the true spirit of the holiday. Many of the traditions of eons ago continue to exist unchanged, so Christmas in Greece maintains its originality and many of the customs.

In Greece, a fasting period would start almost 40 days before Christmas. While the fasting was predominately for religious reasons, many considered the period to be a healthful practice as well. The faithful would not eat any animal or its related products, i.e. meat, dairy or eggs.

As Christmas drew near, preparations began so all would be ready for the big holiday. Houses would be cleaned with extra care, and a few days before Christmas housewives would prepare the Christmas cookies, which would be eaten on Christmas Day when the fasting ended.

In the past the honey cookies (melomakarona) were made exclusively for Christmas, while sugar cookies, or kourabiedes (kourabiethes, th as in this), were prepared for the New Year. Today, though, that distinction is not observed and both melomakarona and kourabiedes are prepared and consumed during the Christmas and New Year holidays period.

In olden times in Crete it was the custom for each family in the village to raise a pig, or “hog” (hiros in Greek), which would be slaughtered on Christmas Eve and served as the main holiday dish the next day.

On the second day of Christmas the villagers would cut up the pork meat and make:

The Christmas hog was the basic source of meat for many weeks. Of course, we are referring to a diet particularly poor in meat – the famous Cretan (Mediterranean) diet which provided Cretans of yesteryear with good health and longevity.

Nothing was wasted from the Christmas hog, as there was a use for each piece of the animal. Even the bladder, or “balloon” as it’s known, would be washed out and cleaned, then blown up and used as a ball – a precious gift for the children of that day.

In many areas around Greece in the past, parts of the pig would be used as a basis for several home remedies, while other pieces were used for sooth-saying. The slaughterer, or one on the elders in a diviner role, would study and interpret the animal’s entrails. Then he would make predictions of the future for such things as the home, the harvest and the weather.

NOTE 1: The custom of the turkey for Christmas arrived in Europe from Mexico in 1824 A. D. It is now widely used in Greece and has almost replaced the pork meat for holiday fare – but not completely.

NOTE 2: The folklore writer Kostas Karapatakis, in his book “The Christmastide, Old Christmas Customs and Traditions,” reports that the Romans would sacrifice pigs to the gods Dimitra and Kronos so they would favor them in cultivating the land. This would take place from December 17 through 25, which was also the period for slaughtering the animals until a few years ago.

The singing of Christmas carols is a custom which is preserved in its entirety to this day.

Children still go from house to house in twos or more singing the carols, while accompanied by the sounds of the triangle, even guitars, accordions, lyres or harmonicas. 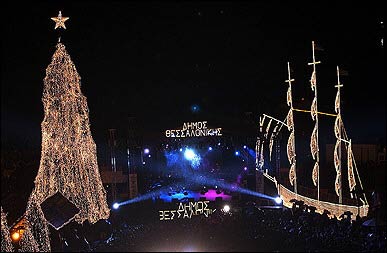 THE CHRISTMAS TREE IN GREECE

Today almost everyone buys and decorates a Christmas tree in Greece, whether it be real or artificial. Usually they are decorated a few days before Christmas and remain in the homes until Epiphany.

The Christmas tree, assumed to be foreign, may even have some Greek roots. Use of decorated greenery and branches around New Year is recorded as far back as in Greek antiquity.

In older times, this custom did not exist in Crete and in some other parts of Greece they would decorate little boats instead.

In this photo you can see a Christmas tree and a Christmas boat displayed in a central square of Thessaloniki, northern Greece. (source AFP).