Illuminated boats, roasted pork and honey cookies are all staples of a Greek Christmas. Folklore expert Evangelos Karamenes spoke to Culture Trip about the most popular Greek Christmas traditions to have survived the centuries.

Christmas celebrations in Greece officially last for 14 days, starting on Christmas Eve and ending on Epiphany (6 January) with the ‘Great Blessing of Water’. Following the Gregorian calendar, the Greek Orthodox Church celebrates Christmas on 25 December. However, as soon as December arrives, festivities begin: homes are decorated, and the smell of Christmas treats is in the air.

Evangelos Karamanes, a research director at the Hellenic Folklore Research Centre (HFRC) at the Academy of Athens, gives his insight into the meaning and the origins behind some of the most deep-rooted Greek Christmas traditions.

Originally a German and Scandinavian custom, the tradition of decorating Christmas trees was introduced to Greece in 1833 when the Bavarian Prince Otto, who was at the time ruling the country (1832 – 1862), decorated the first Christmas tree in his palace in Nafplio. According to Karamanes, for the next few decades Christmas trees were only seen in upper-class households and the custom only became widely popular after World War II. Until then, it was much more common for Greek households to decorate a small boat. Being a maritime nation, Greece has a long naval heritage and the illuminated boat symbolises a love and respect for the sea, as well as the anticipation of reuniting with seafaring relatives and welcoming loved ones home. 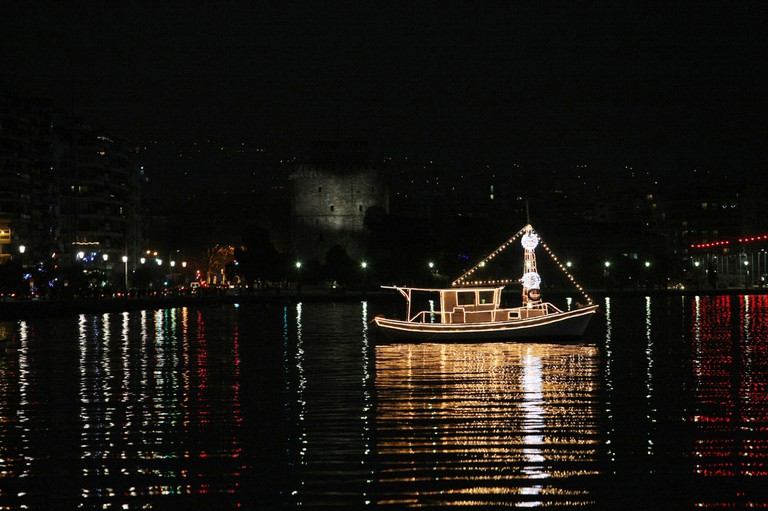 Christopsomo (Christ bread) is a round loaf that is a staple of the Greek Christmas table. “Christopsomo dates back to the Ottoman era and still remains part of the customary festive food that are a prominent element of Greek Christmas traditions,” Karamanes explains. Though the decoration differs based on the region and is adapted to represent the households’s life and work, every Christopsomo has a cross made of dough in the centre, as well as almonds and nuts sprinkled on top to symbolise prosperity. “By molding the dough into scenes from agricultural life (e.g. animals, farms and vineyards), housewives aimed to distinguish Christopsomo from the regular bread loaves and signify the special occasion of Christmas day. At the same time, its symbolic meaning is to bring a productive year to the household,” he adds. Christopsomo is eaten on the night of Christmas Eve. 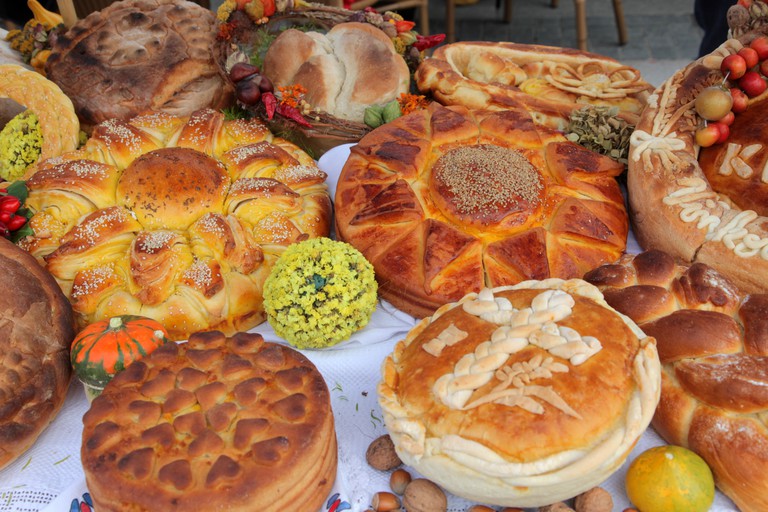 Traditionally, the main dish on the Greek Christmas festive table was pork – a custom that many Greek families preserve. “Turkey made its appearance in the late 19th century, when the elite started following the trends of French cuisine,” says Karamanes. In some regions, it is common to make cabbage leaf rolls filled with pork accompanied by celery or spinach. “Like most traditions, the custom of eating pork during Christmas not only has symbolic meaning but it is also strongly related to the household’s economy,” explains Karamanes, adding that parts of the pig were preserved and eaten throughout the rest of the year. During the slaughter, families followed a ritual, ending by painting a pig’s blood cross on children’s heads to protect them from headaches.

Melomakarona (honey cookies) and kourabiedes (sugar-coated butter cookies) are the most popular traditional Christmas desserts in Greece. Made solely of ingredients sourced locally, these scrumptious delicacies have, according to Karamanes, been part of Greek tradition since antiquity. “The main ingredients of melomakarona and kourabiedes are oil, honey, oranges and nuts, which are Greece’s most famous food products. Even though nowadays these honey cookies are connected with Christmas time, in ancient times Greeks were eating them as an everyday dessert” he says.

Kourabiedes are made with white sugar, almonds, flour and butter © mpalis / Getty Images 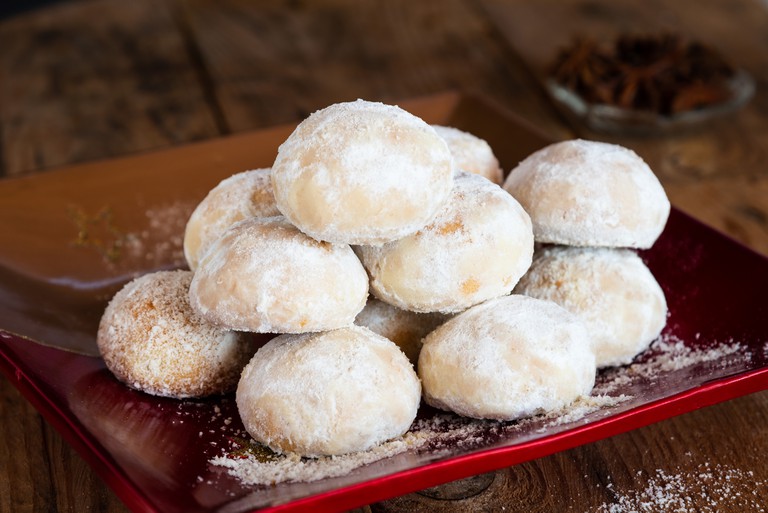 On Christmas Eve, doorbells in houses around the country start ringing from as early as 7am in the morning. Groups of kids holding musical triangles stand at the doorstep waiting for permission to begin singing traditional Christmas carols (kalanta). Greek Christmas carols start with the narration of Christ’s birth, continue with expressions of praise for the household and the people living in it and finish with the kids’ request for a symbolic gift. In addition to a small amount of money, the lady of the house usually offers the children a sweet treat (normally a traditional melomakarono or kourabie).

Vasilopita, translating to Saint Basil’s pie, is a traditional dessert made for New Year’s Day. Every Vasilopita contains a coin; the head of the family cuts the pie into pieces, and whoever finds the coin is said to be in store for a lucky year. This tradition derives from the myth that residents of Cappadocia had collected money and jewellery to give to the area’s tyrannical prefect as a tax. Saint Basil managed to change the prefect’s mind and exempt local people from having to give away their valuables. Not knowing how to return the possessions to their rightful owners, the residents followed Saint Basil’s advice and made small pies. Saint Basil then put the jewellery and money inside the pies and miraculously each person received their own valuables.

The Blessing of Water (Epiphany)

Epiphany (January 6), called Theophany and colloquially Ta Phota (meaning ‘lights’) in Greece, is a feast day celebrating the baptism of Jesus at the Jordan River by Saint John the Baptist. After the Divine Liturgy, priests carry out the water blessing. Priests throw a cross into the sea, river or lake and a group of men jump into the water to recover it. It is said that the one to find the cross first will be blessed for the whole year and that, following the ceremony, the water is totally cleansed. 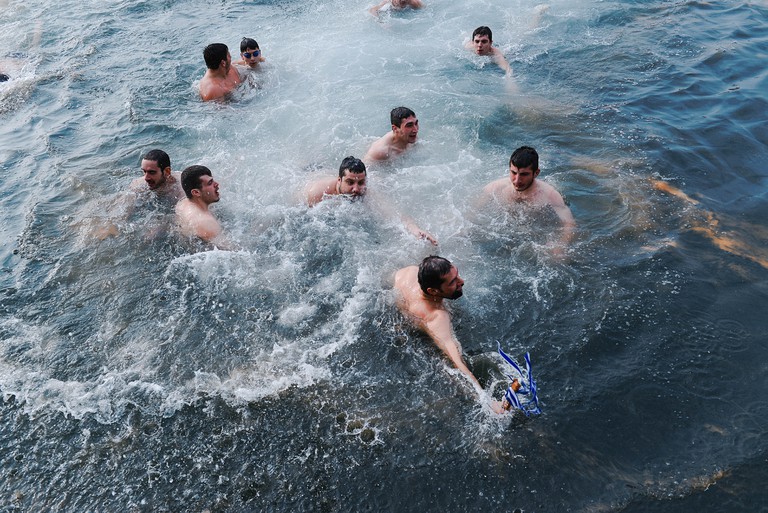